To share your memory on the wall of Christine Barnes, sign in using one of the following options:

To send flowers to the family or plant a tree in memory of Christine Barnes, please visit our Heartfelt Sympathies Store.

We encourage you to share your most beloved memories of Christine here, so that the family and other loved ones can always see it. You can upload cherished photographs, or share your favorite stories, and can even comment on those shared by others.

Posted Jun 22, 2019 at 07:35pm
To the family of Ms. Barnes, please accept our condolences for the loss of your loved one. We know there are no words to express the grief you must feel. Please know that very soon those tears of grief will be replaced with tears of joy as you welcome back your loved one in the resurrection. We hope these words bring a measure of hope.
Comment Share
Share via:

Posted Jun 12, 2019 at 09:47pm
I loved Chris and Bob, she said we was kissing cousins, I said, no my cousin married your granddaughter, she repeated that we was cousins, I just loved her the same as my Grandmother, great Aunts and you, know, we was best kind of relations... Choose! When Stephen called me I didn't feel any huge sadness, I just felt love for her and Bob and could just see his face watching her come through the Pearly Gates and the party that started and Ain't stopped yet. I know it wasn't a shock, just the same prayers for all. Michael
Comment Share
Share via:
RQ

Posted Jun 10, 2019 at 01:13pm
Sweet Mrs. Barnes! I throughly enjoyed our visits over the past years. She would bring her great-grandkids lunch at school. She often came early so we could visit. Mrs. Barnes shared many a stories about her sweet family.
She was a precious lady who spoke her mind. I really loved her and her visits.
Rhonda Harris
Comment Share
Share via:
DR

Posted Jun 10, 2019 at 12:03pm
Please accept our deepest and heartfelt condolences at this most challenging time. May the sweet memories of your dear loved one and God's Word bring you comfort in the days ahead as we eagerly await the fulfillment of His promises (Isaiah 26:19 and Psalms 37:29).
Comment Share
Share via: 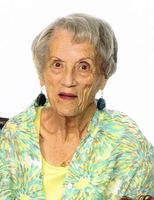 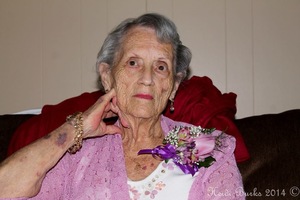