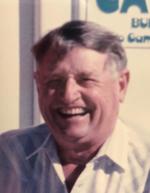 Lou was a devoted and loving husband, father, grandfather, great-grandfather, brother and friend. He was a veteran who served in the United States Navy aboard the Battleship USS Iowa and USS Bremerton. He was recently honored in Abilene for his service to our country.

He and Sharon were Honorary Base Commanders for the Dyess Airforce Base in Abilene. He was a member of Abilene Chamber of Commerce, Abilene Home Builders Association, American Restroom Association and a member and former board member of Portable Sanitation Association International. He was owner/operator of Can-Doo Portable Restrooms in Abilene and San Angelo. Lou was a proud Texas longhorn cattle rancher.

Lou will always be remembered for his humor as much as for his giving heart and his love for his family and friends. In Peoria, he will be remembered for his commercial appearances as Harvey Wallbanger for P & W Builders in the 1970’s through the 1980’s. In Abilene, he also made regular appearances on a local radio show where he was his own alter ego, Luke Warmwater. Lou always had a joke to lift everyone’s spirits.

He and Sharon considered serving the community as an important part of their lives. Over the years he and his wife supported many worthwhile organizations including: Peoria—Arthritis Foundation, MDA, Easter Seals, American Cancer Society, and St. Jude; Abilene—Ben Richey Boys Ranch, National Center for Children’s Literature and Museum, The Grace Museum, The Center for Contemporary Arts and so many others which they supported over the years.

Online condolences may be made at www.northsfuneralhome.com