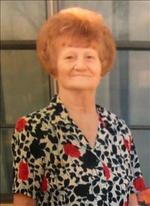 Visitation will be held at North's Funeral Home Memorial Chapel on August 21, 2019 from
5:00-7:00 PM. Graveside service will be held August 22, 2019 at the Texas State
Veterans Cemetery of Abilene at 10:00 AM, with Minister Aubrey Rodgers Officiating.


Aletha was born January 20, 1937 in Indianapolis, IN to Elizabeth Gephart and Este Emerick.
Aletha received her Primary education in Indiana. She married William H. Greenough, Jr. in Columbus, Indiana on March 7, 1955 and they spent 64 loving years together. She and her husband traveled the world and lived in several different places all while he was serving in the United States Air Force. Columbus, Korea, Long Island, and lastly to Abilene, Texas. Aletha loved her family, spending time with her husband, dancing and playing games. Aletha was preceded in death by both parents, two brothers: Este Emerick, Jr. and William Emerick.

Online Condolences may be made at www.northsfuneralhome.com