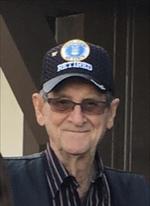 Jesus called Weyman Samuel Kirkpatrick home unexpectedly after suffering from an agent orange-related illness on January 15, 2020 at Abilene Regional Medical Center. He was 85 years old. The family will receive friends and family from 5-7 PM on Friday, 17 January at North Funeral Home, 242 Orange Street, Abilene, TX. A memorial service is planned for Saturday, 18 January,at 2pm at Elmwood West United Methodist Church, 1302 S Pioneer, Abilene, TX. A military burial service will be on Tuesday, 21 January, at 10:00 AM, at the Texas State Veterans Cemetery at Abilene, 7457 W Lake Rd, Abilene, TX.
Sam was born in Loraine, TX, on 17 March 1934 to Weyman and Mary Ruth Kirkpatrick. He has one sister, Nita Christie. The family moved to Douglasville and then settled for many years in Texarkana, TX. Sam graduated from Texarkana High School in 1953 and enlisted in the United States Air Force in 1954. He attended Texarkana College.
He had a variety of duty stations over a 20 year career. After Korea (‘55-’56) he moved to Greenville, SC, where he met his beautiful and treasured life-long partner of 63 years, Helga Koch (Peggy). She was a recent immigrant from Germany. They married on 1 March 1957 and brought four wonderful daughters into the world: Cathy Evans, Monica Zazworsky, Lori Kirkpatrick and Mary Frizzell. He served in Thailand during the Vietnam War conflict in 1966-1967 and then again in 1972-1973. He retired while serving at Dyess Air Force Base on 1 March 1975.
His next career and passion was as a trucker (both regional and cross-country). His CB handle was “Triple Nickel.” He was an owner operator, from August 1984 through August 1996. Most of that time was he was leased to United Van Lines where he hauled trade shows, electronics and special commodities. After 1996 he drove part time for various local companies up until the week before he passed away.
Sam was a member of Elmwood West United Methodist Church. He was a Freemason with the John Sayles Lodge #1408, Abilene, TX, the Scottish Right in Waco, TX and a Shriner with the Suez Temple in San Angelo, TX.
He enjoyed driving, traveling and visiting Peggy’s family. His fondest memories were of his wife, daughters, grandchildren and great grandchildren. He stated if he could live his life over again, he would not change a thing.
He is survived by his wife, Peggy “Chief” Kirkpatrick, his daughters, Cathy Evans (Russell), Monica Zazworsky (John), Lori Kirkpatrick, and Mary Frizzell (Kevin), his sister Nita Christie (Theodore), seven grandchildren (Brian, Samantha, Jessica, Miranda, Dan, Jen and Kade) and 7 great grandchildren (Leila, Zane, Kelsey, Jaret, Brett, Legend, and Porter) , niece Tracie Thomas (Kevin), and nephew Shawn Christie (Nissa) and their children, and his 2 cats.
In lieu of flowers and gifts, those wishing to honor Sam’s life with a memorial gift may send them to Elmwood West United Methodist Church or the Shriners Hospital for Children (shrinershospitalforchildren.org).