To share your memory on the wall of Riley Friend, sign in using one of the following options:

Provide comfort for the family of Riley Friend with a meaningful gesture of sympathy.

Riley, or Earl as many called him, born on March 18,1922 in Stringtown, Oklahoma to Sarah (Jackson) and John James Friend.

He and his twin sister were the youngest of ten children.

He was a member of the Hodges Baptist Church and for many years enjoyed singing in the choir.

Earl enjoyed farming and ranching and enjoyed a large garden each year, especially watermelons and black eyed peas, and would share his harvest with many friends.

He also enjoyed working on small motors and was always fabricating a new gadget to be added to an existing lawn tractor or tiller.

He looked forward each year to the family reunions, especially the horseshoe tournaments of which he was the champ for many years.

He was a proud WWll Navy Veteran, serving on several ships during that time.
He is preceded in death by his wife, Billie Lounell Spivey Friend; his parents; and eight sisters.

To send flowers to the family or plant a tree in memory of Riley Earl Friend, please visit our Heartfelt Sympathies Store.

We encourage you to share your most beloved memories of Riley here, so that the family and other loved ones can always see it. You can upload cherished photographs, or share your favorite stories, and can even comment on those shared by others.

Taylor Family and Family at Pleasant Grove Cowboy Church have sent flowers to the family of Riley Earl Friend.
Show you care by sending flowers

Posted Apr 27, 2020 at 04:06pm
Please accept our most heartfelt sympathies for your loss. Our thoughts are with you and your family during this difficult time.

Posted Apr 26, 2020 at 09:46am
Wishing we could be with you guys. You are in our thoughts and prayers. Know your dad can run unbridled in the wind. Love you all!

Posted Apr 23, 2020 at 08:38pm
We are so sorry for your loss. May God wrap you in His loving arms and give your family strength and guidance during this time. 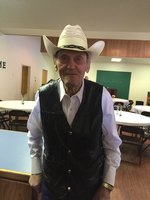