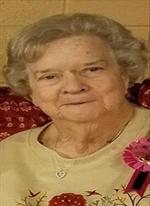 Joyce Muhle, 81, passed away Friday morning, July 31, 2020. Funeral Service will be held at 10 a.m. Monday, August 3, at North’s Funeral Home. Graveside service will be at 1 p.m in Rochester Cemetery. Visitation will be held from 5-7 p.m. on Sunday Evening, August 1, at North’s Funeral Home. Pall Bearers are Jonny Hege, Dylan Mills, Jarod Whitworth, Noah Ramsey, Joseph Wall, and Richard Green.
Joyce was born on April 11, 1939 in Abilene, TX to the late Tom Woods and Opal Yates Woods. She grew up in Abilene and resided here for most of her life. Joyce met and married Fred H. Muhle in October of 1961. They were married for 38 years Joyce was a homemaker and enjoyed caring for her family and pets. Joyce also enjoyed traveling on family vacations with her husband. Those vacations often included other family members including her mother, mother-in-law and grandchildren. In the late 80s Joyce joined her late husband Fred in working at the Gulf service station on the corner of S. 1st and Butternut and at the Bourland Service station on North 10th Street. Joyce and Fred enjoyed working together for several years until their retirement in the 1990s.
Joyce is survived by two sisters, Frances Simon of LInden, and Betty Wall of Abilene, two daughters, Patricia Carter, and Linda Cheryl Ervin both of Abilene, five grandchildren, nineteen great grandchildren, seventeen great-great grandchildren as well as several nieces and nephews.
She was preceded in death by her parents Tom and Opal Woods, her husband, Fred Muhle, two brothers, Billy and Eugene Woods and two grandsons, Alan Gentle, and Michael Carter.
The Family would like to thank the nurses and staff at the Windcrest skilled Nursing Center for caring for Joyce over the past few months. Family wishes expressions of sympathy to be made in the form of donations to the Humane Society in honor of Joyce’s love of animals. Online condolences may be made at www.northsfuneralhome.net