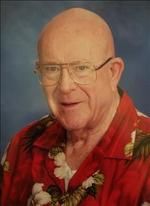 Thomas F. Howell of Abilene passed away on Sunday August 30, 2020. Due to the current restrictions on travel and gatherings, the family has decided to delay holding a memorial service at this time. The family looks forward to celebrating Tom’s life with his friends at a future date.
Thomas F. Howell was born on April 23, 1931 in Alamosa, CO to Dr. Thomas F. Howell, Sr. and Josephine Roy Howell (Jones). On June 18, 1955, he married his childhood sweetheart and the love of his life Marjorie Shaw Howell in Monte Vista, CO. They enjoyed 48 years together before Margie’s death in 2003. Tom graduated from Monte Vista High School in 1949. He received his Bachelor of Science degree from Colorado A&M in 1953, and his Doctor of Veterinary Medicine degree from Colorado State University in 1957. He worked as a Food Inspector for the U.S. Department of Agriculture for 33 years before retiring in 1988. He was a lifetime member of the National Association of Federal Veterinarians.
Tom and his family moved to Abilene in 1971. Tom was a member of First Central Presbyterian Church in Abilene. He was an active member of the Abilene YMCA, and enjoyed the many friendships of his “Y family” over the years. Tom loved to travel, enjoyed classical music, and built friendships wherever he went. He had a special love of hiking and fishing in the Colorado Rockies, and went there whenever he could to renew his spirit..
Tom was preceded in death by his parents and his wife.
Tom is survived by his daughters Katherine Howell Lawson and husband Donald, and Margaret (Maggie) Howell; his brother Roy Howell and wife Edna; and his grandchildren Sara Lawson, Joshua Lawson, Jerry Lawson, and Rachel Lawson.
In lieu of flowers, the family requests that memorial gifts be made to the YMCA of Abilene and the Buffalo Gap Presbyterian Church Camp.
Online Condolences may be made at www.northsfuneralhome.com